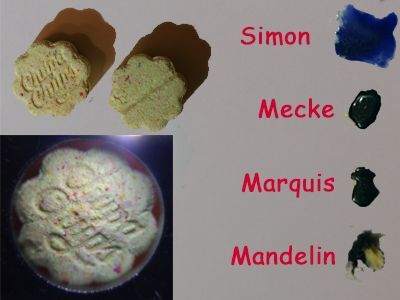 buy a test kit for $14.95
Posted by
November 11, 2015
Date Submitted
pillpaper
Description
Yellow Green Chupa Chups - 3D Logo shape, half cut on back, Chupa Chups imprint on front. Quality is not one of the best but not bad, easy to crumble dough...

All reagents went almost instantly in their colors


Took more than once, in different combinations and solo. Here is one occasion worth mentioning:

T 00:00 - Took One
T +00:30 - Feeling slight effect of awareness, mood shift but not as the regular MDMA
T +00:50 - Feeling more aware, but somehow hit by the effects, everything had like a glow to it, very nice visuals(light trails,color enhancement,etc), energy levels normal but the dancing mood on, euphoria above average but not considerable
T +02:00 - Took half with 100mg MDMA crystals
T +02:30 - Now I could feel more of the MDMA effects, euphoria and energy more that with the first one and somehow I could feel the difference between the Chupa and the MDMA, overall more intense visuals, but no hallucinations at this point, still dancing and chatting, not a bad mood to be in, it's kind of what you would expect form a good pill
T +04:00 - A little bit tired from all, good mood, excellent state of mind, visuals still there, urge to dance still there but energy not that high so I decided to stay down for a bit
T +04:15 - Took another one
T +04:40 - The last one hit me, time & space started to warp somehow in my head, visuals more intense, but everything felt so good, very comparable to tryptamine effects, deep sense of calmness and awareness, closed eyes visuals were crazy fun
T +06:00 - Unaware of time(I didn't even care) and how much it passed since the last drop, the music went to crazy mode, my energy levels were not that high so I decided to take the last one I had to keep me up for the next hour and a half at least(by my calculations back then...)
T +06:20 - One friend asked me to go with him to get some MDMA crystals. I couldn't even walk straight, couldn't even keep my thoughts straight but in an excellent mood for doing anything. I didn't even remembered that I took one pill 20m ago and split the crystals in two(0.15mg each) and took one
T ~06:40 - MDMA + last pill hit me like a LSD blotter... That was the point when I remembered that I took the pill and the crystals, remember about telling my friend about that too. From there on... land of everything for me.
T ~07:00 - Now this is something that I will not forget... By this time I was hallucinating heavy but manageable, still could talk with others, dance etc. All the faces around me were shaping in all kind of stuff, at one point I could see dots on their faces like facial recognition software, they were red,blue and green. For a few moments I was in a space that had no floor or ceiling, no walls, no nothing(I could still hear the music dough) only grids formed by the dots on everyone faces, like matrix style grids in all 3 colors... Excellent trippin' I can tell you that. Never encountered hallucinations like that especially on daylight conditions, usually MD hallucinations are common at night or low light conditions but now they were everywhere...
T +08:30 - Went home due to low energy levels and fatigue, but still trippin' light at this hour. Could walk home with no problems, engage in conversations and everything else, I went asleep 4 hours later with almost no problems
------------------------------------------------------------------------

These are worthy of their logo, these are the perfect deserts, the pill that you take at the very last of your roll. After all "the heat" from anything you had taken before this is the relaxation that you need, this one does not give you euphoria or energy like your regular MDMA pills. This ones gives you a state of awareness, peace and mental pleasure. Effects are more on the mind that on the body(not what you expect from phenethylamines). The effects of one pill are comparable to a half dose of mushrooms(psylocibin)...

I asked around and documented myself(erowid) to see what it may be because this is not what you expect form MDMA. After reading and compared the effects the closest one I got to was MDA(due to it's more psychedelic effects) but it that was the case the Simon reagent should had no reaction, mine had Blue(regular MDMA), maybe it has both, I don't know for sure what to say. Even the pill has many colors in it's texture(see image). When I tested it with the reagents I was so anxious to find out what substance it holds in it because the effects are so different from the regular pills. After running all tests for 5 times I got the exact same results.

Don't get me wrong the effects are very nice, for me at least, but I would want to know what this is, have anyone encountered this effects before from MDMA only? Has anyone tried MDA in a higher quantity? does it resemble with these effects? I had never taken MDA before to compare it...

After testing them in all kind of ways and combinations, for me the best way to take them is at the last roll, like a desert after a fine meal.

I would recommend taking with half, especially beginners. Experienced people could take one if needed...

I should tell that I am a regular consumer - party man - have quite a tolerance and also weight around 95kg. I don't advise anyone to do the same as I did, this report is strictly for information.

well, you're experienced one and I love to read your reports. what I might add is that about 10% of mdma converts to mda (that u probably knew)
the thing is that u took very much of mdma so u were tripping balls