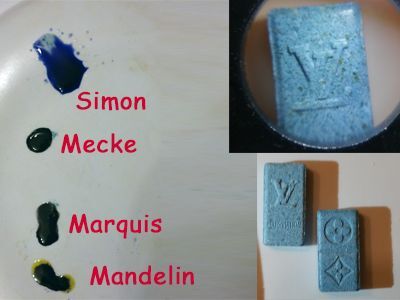 Buy MDMA Test Kit for $14.95
Posted by
November 10, 2015
Date Submitted
pillpaper
Description
Blue Louis Vuitton - Rectangular shape, half cut on back, 2 imprints one on each half.On the front: firm LV logo outprint, imprint "Louis Vuitton" also. Strong & smooth, very good quality - one of the best quality you can get.

All reagents went almost instantly in their colors


Took more than once, a brief report on one of the occasions:

I took them a lot of times during this summer, in different combinations or solo. Overall I would say that they are good pills, nice feelings & effects, but unfortunately not for me.

I was a little bit concerned by the downs between the waves because it almost felt like I was awake. I have not encountered the effect at this level with no other pill before. Other people also encountered some of these effects but at a more lower intensity than me. One time I felt asleep after 1h15min of eating it, slept for 15 minutes... After that I decided that I need to boost them up somehow(other pills,substances) or not take them anymore. Some results worth mentioning:
- 1x 25I-NBOMe blotter & 2/3 LV, T+03:30 took 2/3 LV - Nice effect, mad levels of energy, good moods, danced for 5 hours after, no more downs & ups
- Amphetamine(ingested) + LV - this one is kind of nice(repeated it on several occasions), not that aggressive energy levels as the blotter gave me, but no fatigue problems between the waves, effects of the pill somehow lasted longer too

I would recommend starting with half, especially beginners. Experienced people could start with one if needed...

I should tell that I am a regular consumer - party man - have quite a tolerance and also weight around 95kg. I don't advise anyone to do the same as I did, the report is strictly for information.

This here is a top quality bean, been rolling on these for straight summer, these had some visual effects on me especialy when mixed with weed